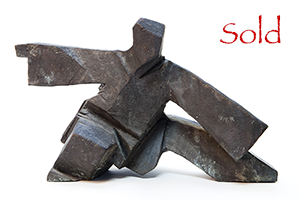 Ju Ming (朱銘) (1938-) is a Taiwanese sculptor who attained fame in Taiwan in the 1970s, and in New York in 1983. Ju Ming was trained as a woodcarver, apprenticed to Lee Chin-chuan as a teenager. He developed his skill and applied it to a range of media, including bronze, styrofoam, ceramics, and stainless steel.

In 1959, he moved back to Tunghsiao and opened his own studio with apprentices, creating a successful crafts business which left him dissatisfied. He became more artistic and tried innovative techniques. Ju married Chen Fu-mei, also from Tunghsiao, three years later.

After winning several awards in the prestigious Taiwan Provincial Art Exhibition, Ju felt that he could only develop further as a sculptor if he re-apprenticed himself, this time to Yang Yu-Yu, who himself had only just returned from a three-year art scholarship in Rome. Yang agreed, impressed by “Ju’s flowing lines through the natural grain of the wood, the form executed with such an assured gentleness and humility.”

In 1976, Ju took up T’ai chi on Yang’s advice to develop physical and mental discipline.[1] He developed greatly from this practice and started thinking about sculpting works on the theme of T’ai chi, which had never been done before. Ju’s solo exhibition occurred in March at the National Museum of History in Taipei due to Yang Yu-yu convincing the museum authorities to show his student’s pieces. It was highly successful and he was named as one of the Ten Outstanding Youths of 1976.

From 1980, Ju continued to gain international acclaim and exhibited abroad. He started The Living World “family” which he continues to expand. These bright figures are made of bronze, stainless steel, painted wood, foam rubber and cast bronze, giving him freedom to depict the human form in all its varieties. Another is his “Living World” series, depicting figures drawn from a modern, westernized society. Much of Ju Ming’s work is housed at the Juming Museum, just outside Taipei. The museum was built at the artist’s expense, and is open to the public. He was awarded the 18th Fukuoka Asian Culture Prize in 2007.